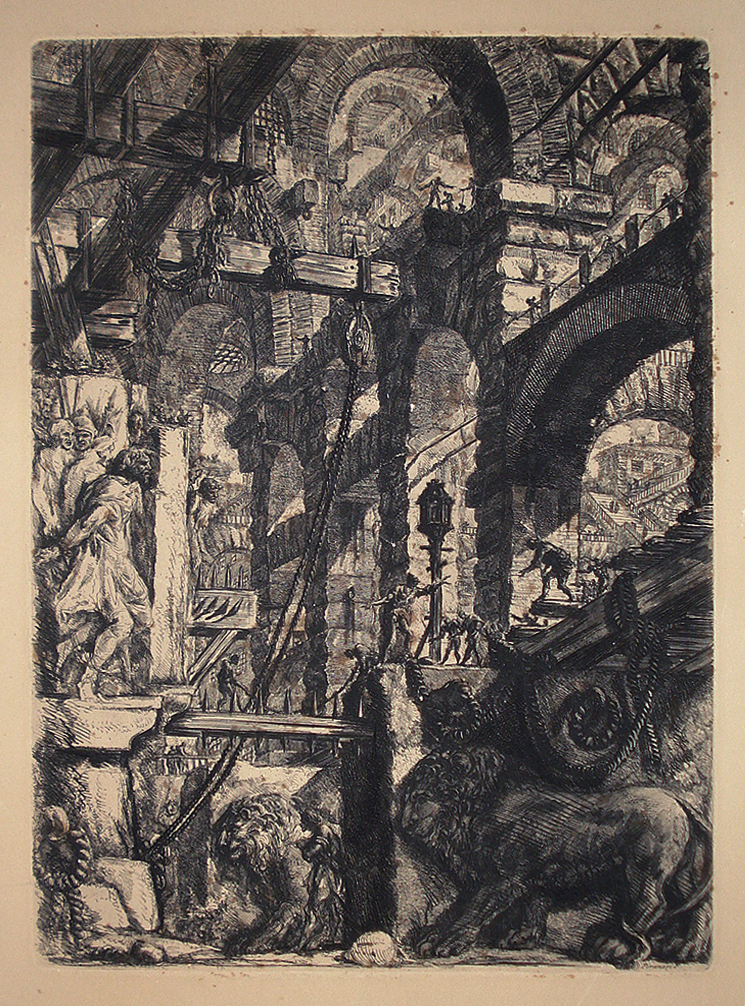 The lion. Copper engraving published posthumously by the Regia Chalcography in 1870. Measurement of the plate 56.5 x 41.5 cm. It is the fifth plate in the series of 16 plates of the "Prisons of invention", a monumental work of imaginative and theatrical architectures. The work initially included only 14 plates which were published in 1745, they were clearer, with fewer background elements. In 1761 2 tables were added, II and V. In 1770 the publisher of Piranesi, Bouachard, convinced him to make them darker to increase their theatricality. This specimen is an edition of the Regia Intaglio, printed in Rome in 1870. In fair condition, large margins, light flowering, light peeling. Engraved by Giovan Battista Piranesi. Draftsman, engraver and architect, born in Morano di Mestre on October 4, 1720, died in Rome on November 9, 1778. Someone has nicknamed him the "Rembrandt of architecture". This artist has not only reproduced the ancient vestiges of the power of Rome, but was also one of the most authoritative archaeologists of his time. He was a pupil of Scalfarotto, of the brothers Giuseppe and Domenico Valeriani, he was also a pupil of Bibiena. He worked and had Giuseppe Vasi as a teacher with whom he had a very conflicting relationship, it seems that he wanted to kill him because of the envy that Vasi had towards him, for example he did not teach him enough the secrets of biting. It is believed that he also worked on painting with Tiepolo. His first work was "The Roman Antiquities" which was followed by numerous works. He has engraved about 2000 branches, almost all of them large. Despite a great reputation and a magnificent fame he never got rich for the very low prices of his works. He was a member of the Order of Christ and the London Antiques Society.