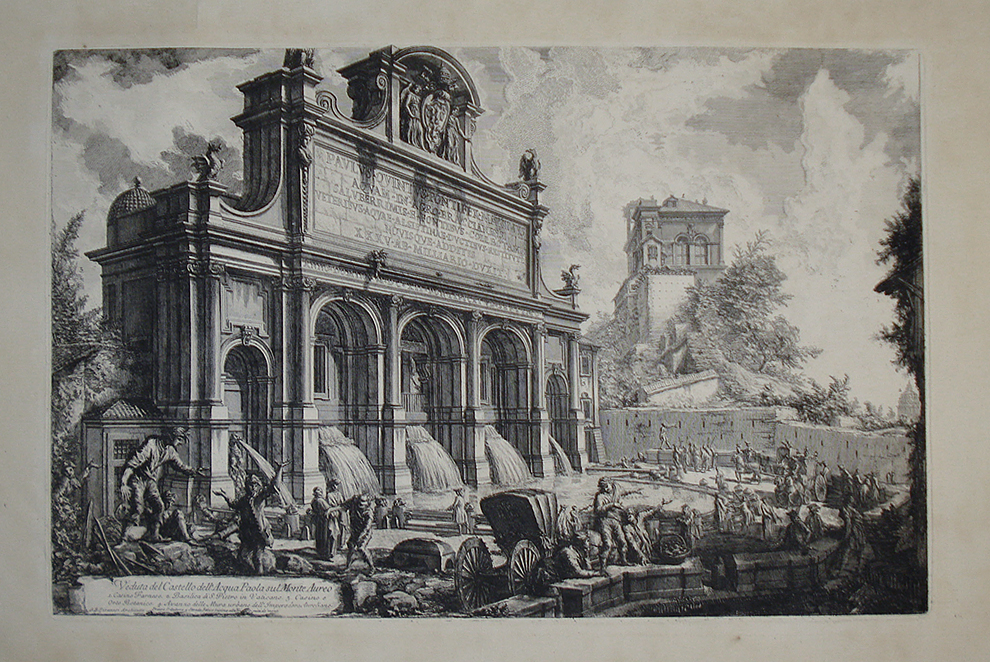 Veduta del Castello dell'Acqua Paola sul Monte Aureo. Copper engraving of 1751, Measurement of the the engraved part 39.5 cm x 59. Shows the Acqua Paola Fontana (fountain) on the Janiculum Hill in Rome. Hind 21 (II/V), third state on five. The print is in good condition, wide editorial margins. Printed on laid paper with watermark "dupuy". Engraved by G.B. Piranesi. Draftsman, printmaker and architect , born in Morano di Mestre October 4, 1720 , died in Rome on November 9th 1778. Someone has dubbed the " Rembrandt of architecture." This artist has not only reproduced the ancient ruins of the power of Rome , but it was also one of the most authoritative archeologists of his time . It ' was a student of Scalfarotto , of Giuseppe and Domenico Valeriani , was also a student of Bibiena . He worked as a teacher and had Giuseppe Vasi with whom he had a very conflicted relationship , it seems that he wanted to kill him because of envy that the jars held him in , for example, not sufficiently taught him the secrets of etching . It is believed to have worked on the painting with Tiepolo . His first work was " Le Roman Antiquities " which was followed by numerous works . He has recorded some 2,000 branches , almost all large . Despite a great reputation and a great reputation not enriched never for very low prices of his works . He was a member of the Order of Christ and of the Society of Antiquaries of London.