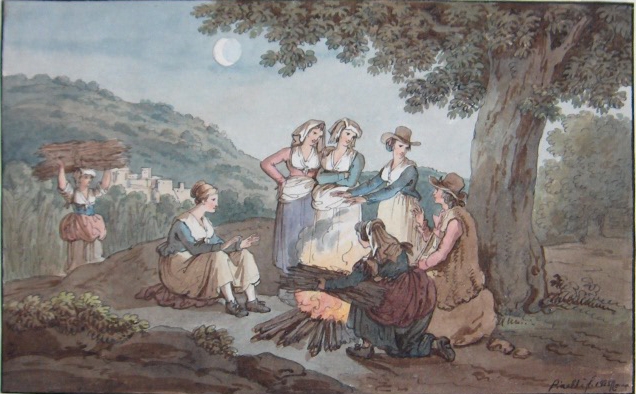 Costumi di popolani. Beautiful and rare watercolor 1825. Measuring 12.5 cm x 20. It depicts a scene from the popular night with people around the fire . In excellent condition , signed lower right , framed in gold era. Painted by Bartolomeo Pinelli . Painter, draftsman , printmaker and modeler . Born in Rome November 20, 1781 , died in Rome on April 1st 1835. He began his studies at the Academy of St. Luke and keeps them in Bologna where he became famous quickly . Return to Rome and starts to produce a significant amount of drawings and prints . Provides illustrations for the works of Virgil , Dante , Tasso , Cervantes and ' Aretino . In 1809 he published the first " Collection of colorful costumes " consists of 50 tables which was followed by other collections always on the customs of Rome and many other works . Pinelli for his work can be considered : " the painter of the Roman people ."